november retreat 3: living in the moment 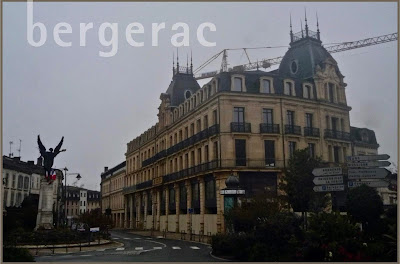 Bergerac on a Sunday morning (17 November) in late autumn before and around 0800 hours is not exactly an hive d'activité. Reminded me of a town in lockdown, if you can imagine such a thing! In the early morning mists and street washed dampness we traipsed, and at last espied a purveyor of breads and cakes open for the odd soul seeking a first baguette of the day, etc. We acquired croissants and exciting looking filled baguettes but gave up on anything further, retired to the wheels and got on the road. 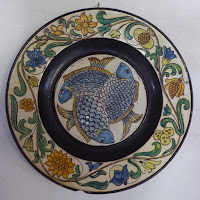 Fog and mists. Sainte Foy-la-Grande finally provided the necessary, rather large good coffees with which to swill down the Bergerac provender (the baguettes held in reserve for lunch). The café is just behind the market hall in the view I include here. It was busy. Sainte Foy-la-Grande was not. Did they forsee a time when this would be the norm? Sainte Foy-la-Grande is the town which yielded the fine Meissen fish plate that graces our kitchen wall these twenty-five years or more, here at Bullsmead Towers. Bought it for a fiver. I have suddenly had a thought! Could I repair that chip in the plate's rim, the reason for it being so cheap? Hmm. A bit of painted polyfilla . . . hmmmmm. 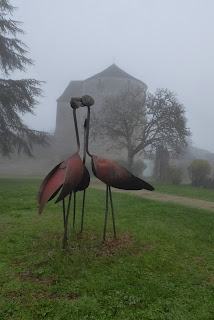 You will, once again, find no reference to our next diversion on the route exhibited on the previous two posts concerning this journey, so I shall not reproduce it again herewith. Mme Melling took us off the straight-and-narrow and via various rutted tracks and country by-ways, to visit the pile where Montaigne wrote his philosophies et thoughts down (mostly in that tower illustrated to left and to right of the ancestral home, pictured above). 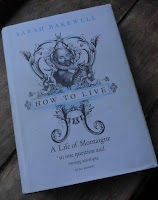 I understand from the literati (my family) that this chap was an all round good egg and a bit of alright when it comes to views on life, loves, philosophy, cats, etc; in Fr of course so mostly beyond my humble comprehension (I blame my school). I have heard of him though (see book from shelf at Bullsmead Court). No tour of the place was available (thankfully) but we were permitted to wander round, for a small consideration, although not at the front of the big house as the present incumbents were in there stuffing their faces no doubt with petit dejéuner-en-crôute. The son and wife were deeply moved by the whole environment and I felt that indeed, it had character.

I am pleased to report that the weather lifted and cleared somewhat as we proceeded hereafter. We eventually arrived on the coast and our oft used route: we stopped on the sea-front once more at Saint George-de-Didonne to consume our sandwiches which we had brought from Bergerac. Excellent, excellent, why would any person on the road want more? Tasty, rapidly assimilated, moderately priced and satisfying. No long waits for service – or that illusive pudding – or terminating coffees – or long waits for l'addition, then similar wait for card reader gadget.  Open the bag, take out the napkin and get it down you. Wipe fingers, brush crumbs off paunch, motor on. Simples. St Georges is quite refined but the out-of-town beach requires chestnut palings to contain drifting sands. Mother and child (unknown to us) are on the wet sand, not walking on the waters.

Our further excursion in this phase of our retreat back to the motherland does feature on the planned route back: namely, reaching the hotel in La Rochelle by means of the coastal road through La Grande Côte, and via La Coubre, Ronce les-Bains, Rochefort etc. We did just that, stopping briefly not far up the road from our very first ever easter rental on this coast, in La Grande Côte, making abeyance to Cordouan, out there in the bay. Now under lighter skies and low light, we motored on to set foot again on the beaches of Pointe de Coubre. The snaps below give you the idea. That's Cordouan, beneath the image of the fishing pavilions at La GC. Monument Historique y'know, World Heritage Site expected, etc. etc. 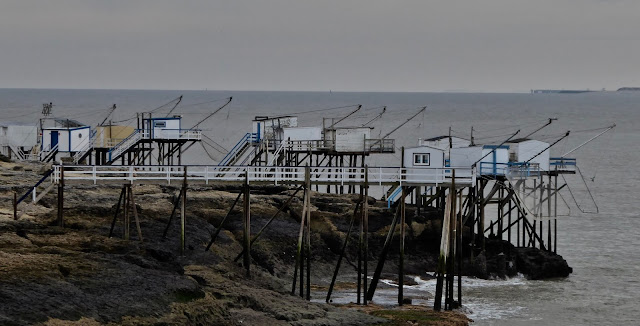 Fans of my Pharesighted blog will be very aware of our fondness for La Coubre. It looked rather fine on this afternoon as at last the paint job has been renewed. It certainly needed it. Closed of course to the climber, a faint hope flickered briefly as there were quite a few folk about, it being Sunday, but no such luck. We contented ourselves with filling our shoes with the exquisite blonde sands of the shore, enjoying the sea air and uplifting late afternoon light, subconsciously social distancing as you can detect below, if we had but known it. Spiffing. 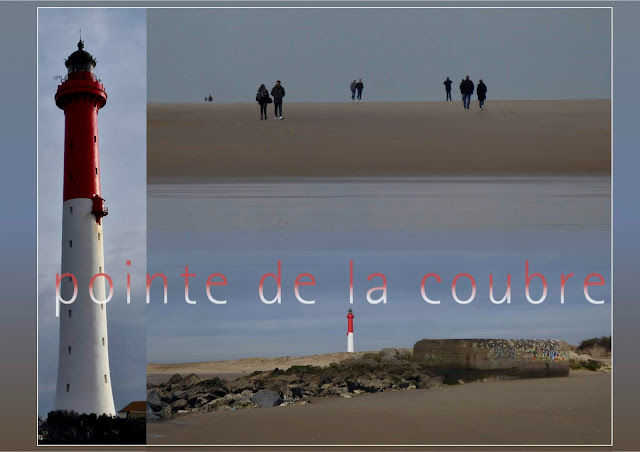 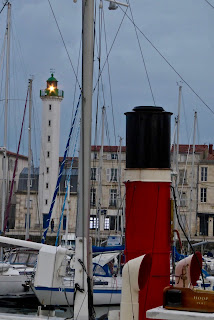 After La Coubre it was a matter of simply driving on to our overnight lodging in La Rochelle, the usual good feed at the place next door and a comfortable night in the unassuming surrounds of the rather atypically good Premiere Classe. Mind you, so sedate was our progress on this day, so untaxing the mileage undertaken, that we still had time for a stroll round the port and a drink in the old port bar before getting back to the serious business of our supper… Ah yes we thought, we will be down this way again for sure in 2020, it will be nice to eat once more in whatever-the-name-is restaurant and see how the restoration of the old port lift bridge has come along…  ah me… folly, what folly!


All pictures on this post are by your author with the exception of the strangely deserted scene in central Bergerac; that image was donated by Young Adam.
Posted by adrian smith