IT IS QUITE WITHIN THE BOUNDS of possibility that we will be sitting ourselves down at this waterside's edge in La Rochelle again this autumn, just like we did in the summer.

That's because we are booked in to an hotel there for our second overnighter this September, whereas we could usually have been expected to transfer here, from Roscoff, in one hop: it is most readily doable, and without straining the tachometer beyond our preferred ration of daily miles when pottering down to the Vaucluse. But this time, y'see, we are conveying a passenger, guest, friend, and risk taker with us, so compelling and persuasive have been our descriptions of our voyages. It's a first, if we don't count the son-and-heir, which we don't as he is cabin crew when he is with us, which he will be on our way back in November. 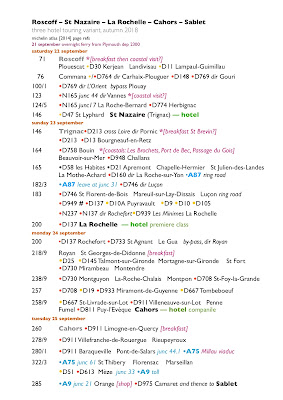 I flatter myself that our eloquence in these matters of blogging and our clearly expressed enthusiasm for our experiences thus far has proved the tipping point to our third party. So it came to pass that we received an application from this friend, to not only sample the renowned levels of distinctive hospitality at our Sablet residence again, but also to mop up a bit of La France by travelling through it with ourselves, instead of flitting over it in an aeroplane.

Inevitably, this has caused us to solemnly reflect upon our route this autumn, slow it down a bit, add in possibilities of the odd diversion or two, and book stop overs accordingly.

So here's the plan. Subject to variation, adjustment, deviation and correction, as ever.  I will report no doubt on how well it panned out; I can confirm that our travel companion has wisely invested in The Michelin  (2018 edition, whose pages luckily conform with our older, 2014 edition) so that she can preview our proposal shown here on the left . . . but almost inevitably, for someone who can assimilate what an atlas can portray, there is some reluctance to miss out that area of gorges or this stretch of coast, let alone that magnificent cathedral or those singular lighthouses,  that study of an atlas, in association with appropriate Green Guides, what-have-you, will reveal.

So it has ben stressed, as gently as possible, that this plan is weighted in favour of the more north-western portions of France, whilst still addressing our companion's desire to pass over the Viaduc de Millau, and tick off a visit to the Med at Marseillan. We can't do everything, after all, this is but a taster…. and anyway the hotels are booked and paid for … so think on. 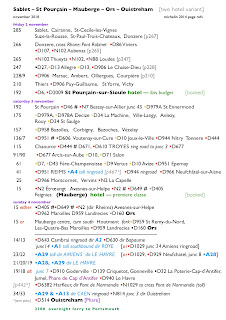 The return, which is likely in due course to attract a descriptive post of its own, is now planned to take us back to Ouistreham*, after many years of neglect of this crossing (to Portsmouth) in favour of more westerly transits. We shall have with us the son -and-heir, as this last journey of the year is planned specifically to coincide with the centenary of Hugh Melling's death in WW1. We will visit Ors Cemetery where Hugh is buried, – one hundred years to the day since he and others were killed nearby, just one week before the Armistice… to pay our respects and keep his family memory alive.

Maybe there will be other Mellings there: we know for sure there are organised visits to pay tribute to the poet Wilfred Owen who died at the same time and place, and lies close to Hugh. So we want to be there early. I refer you to this year's edition of my marmalade, marking this centennary. 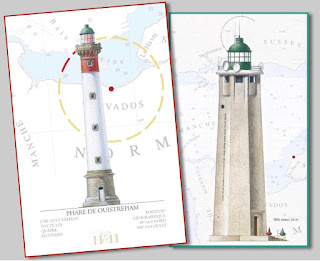 the broad and the narrow 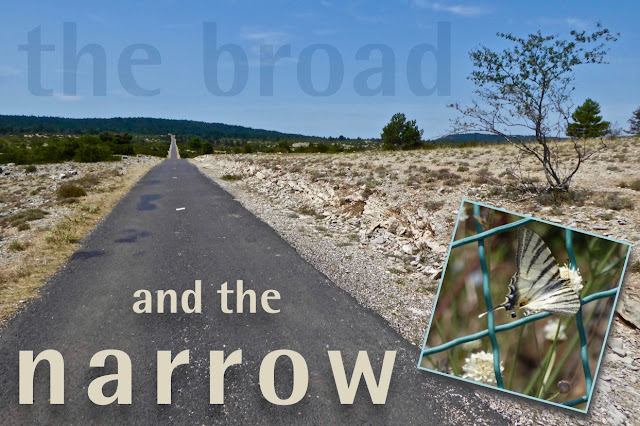 I ALWAYS PROMOTE MAPPING OVER SATNAV. Our journey back from Sablet to our estates in Devonshire this summer provided once more, appropriate illustration of why our policy of using a road atlas to determine our passage across the french road network, so easily provides the support for variation and deviation, faciiltating discovery and extending our cognisance of the landscape we are passing through.

We had expected to be making a rather later-than-usual departure from 1-Rue FB this time as we thought we would be waiting in to hand over the keys of the house, plus a presentation of the house’s foibles, to our friends taking the place over for a week or three. But they made good time and appeared the day before so having dotted ’I’s’ and crossed ’T’s’ before the change of occupation, Mrs Melling and I were able to set out to our conveniently not-too-distant hotel, but now with a spare half day in hand.

We proceeded along our carefully researched route until, having skirted Montpelier and got ourselves on to the A750 autoroute, Mrs Melling opined that a stop for coffee at Gignac would provide us with a break from autoroute pressures, so no sooner suggested than we were swinging off to the aformentioned settlement where we parked up and bought in croissants to accompany our grand crémes, there under the shade of the plain trees, relieving the air temperature of over 30°C.

Rather than doubling back, to carry on where we left off, Mrs M constructed a variation she had spotted as a possibility for further progress toward our hotel without returning to the A750 at all, and possibly taking in some previously unexplored hills and by-ways. There were one or two Route Barrées to sort but with her eye for the smallest of marked roads, Mrs M was able to direct me to point the motor along a feasible if somewhat narrow alternative to the planned route. We navigated through a number of delightful and distinctive sleepy villages into ever wilder and hillier country within which we eventually took a further ‘there-and-back’ diversion to the summit of the highest hill, complete with telecommunications mast and station, to overlook the hot and hazy landscape, mile upon mile in all directions, in a wild garrigue style countryside, frequented by varied lepidoptera and scorched by the mid-day sun. A wonderful find, there on the map and now under our feet and before our shaded gaze.

After this intriguing variation I asked my navigator if she could now extract from The Michelin a further extension of this adventure, avoiding entirely any neccesity to resort to the A75 (and the usual crossing of the Viaduc du Millau). This proved straightforward; we were soon winding our way down and then out of Millau on quiet roads, familiar from the days when the bridge was not built and we wouldn’t set wheel on an autoroute to save our lives.We picnicked in a small village with a swan for company; we motored on, to and through Severac-le-Chateau, from where we regained our projected progression to our hotel in Rodez. 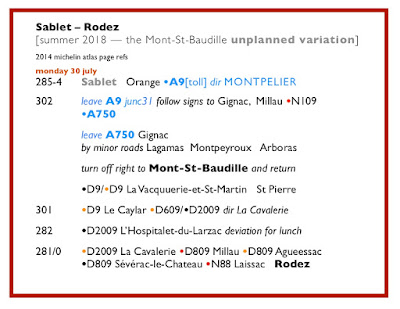 The extra miles incurred over and above what we expected to cover? About twenty miles more, or less; worth every extra yard, for that distinctive experience and variation that is the spice of our travels, teased out of the mapping to hand. No SatNav is going to point out these things. Those who exclusively rely on ‘Tom-Tom’ or similar close off these opportunities, generally arriving at their destinations without having ventured beyond the linear perspective these satellite-cum-GPS systems proscribe.They arrive, predictably. Mostly.
NB I admit that Aguessac is mis-spelt, in the route descriptor illustrated here… 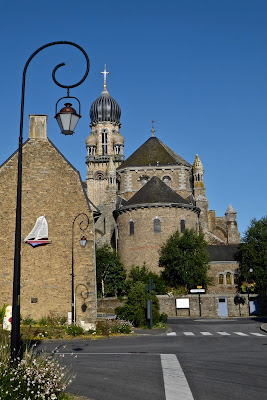 Yes, this summer’s transfer from Sablet to Devon was expected to be a somewhat less adventurous affair than usual as it ran to only two overnights; nevertheless, on each stage on the road we found something new. OK, the on-the-road diversion to the Saumur Coop was not entirely new territory, but then, on the last leg of our journey, the choice of Corps-Nuds for our breakfast stop provided us with another new find: a Russian style Basilican church, completely unforeseen, and seemingly misplaced, there in the French countryside; and all because we were taken with the name of the place, spotted on road signage, and in The Michelin, and deciding we would go see if it was indeed a village populated by people ill-disposed to the wearing of rayment (which it wasn’t, but where the coffee was top flight and croissants commendable).

I say again: if you haven't already, get yourself an atlas, and study it. Immerse yourself. You’ll never run out of places to enquire of and tempting you thither (some may be dogs it’s true, but one has to take a bit of rough with the smooth); that’s life on the road, of course:– that and the Route Barrée that pepper parts of the highway at all or any time of the season – yet always by-passable by the map-savvy Mrs Melling, Michelin Maitresse.

We don’t have SatNav, by the way. Just in case you were wondering . . .

Some other pictures from this trip can be found in summer synopsis 18 via this link.
Posted by adrian smith