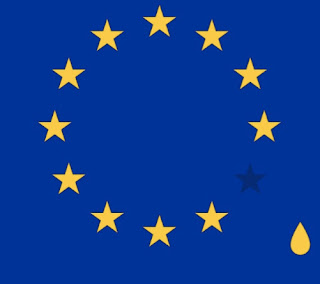 AT THE END OF THIS WEEK THE UK IS SET TO LEAVE THE EU.

It is 'the will of the people'. At least it is the will of those who voted,  52% to 48% who wanted to stay in. So that doesn't count the folk who didn't vote, some 40% of those who had the vote then. It does not count those who couldn't vote, or were too young to vote then.  The electorate were misinformed, lied to and misled. There is little doubt about that.

It is a bloody disaster. A terrible mistake. Small minded. Little Englander thinking. Turkey voting for Christmas. A giant backward step. Isolationist. Irresponsible in respect of industry, jobs, climate change, the environment, the next generation, security, European stability, trade, food standards, culture, fishing. But I shall not go on: the whole of last year (2019) we seemed to be going over and over this madness, the worst decision the UK has made since Suez or before. Divisive or what?

But we will still be driving on the right (in France that is, we will keep left as usual in Blightey). OK, we may be deemed to be aliens now when we do turn up across the Channel, but as far as we are concerned, Mrs Melling, the-son-and-heir and me – we are Europeans first and foremost. We hope to be able to hang on to our Sablet gaff and we know and trust our European friends, so anguished on our behalf for the decision the UK made in 2016, incredulous that in the face of the evidence of mis-information and the repercussions for the UK's future as well as that of the EU, that the UK is going through with it. But even though the UK is hell bent on sailing into a dark and uncertain future, our friends who also come to and live in Sablet will continue to be our friends and fellow Europeans, whatever.

The UK may be leaving but we are not. So there. 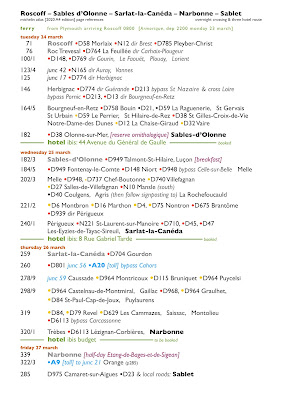 It is our intention to return to Sablet in March. I know how keen my public are to know what our planned progression will be so I publish herewith the draft of our intentions route-wise. We have invested in a 2020 Michelin Road Atlas (our 2014 edition is getting a bit dog eared) so there should be no excuses for incorrect road numbering. As ever, it is but a framework. If Mrs Melling says go off piste, we do that. In the field, as it were.

In the meantime allow me to alert you to my new blog concerning my passion for French lighthouses. There is a link top right to it. And it is wittily entitled phares sighted.  Yes, the winter months don't encourage us to go out much so I have been and done the first chunk of what I hope will eventually cover all of our lighthouse forays. Not that I expect many takers. I seek no reward and no recognition. In this I can expect not to be disappointed…    >sniff<
Posted by adrian smith

THIS IS THE INTRODUCTION to an occasional series I am to making that attempts to address an ongoing fixation I seem to be suffering from with the lighthouses of La France, (and other places, if truth be told) which my family have been kind enough to indulge me in at various times and places. You can now find these postings on a new blog wittily entitled phares sighted and to which this link will take you.