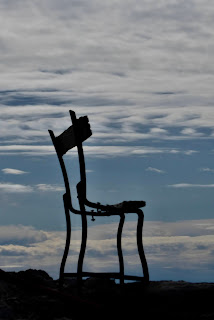 Le Départment de Vaucluse has set to this year
to sort Le Géant out.
Why now?
Would the fact that the Tour de France plans to come back to Le Mont Ventoux in 2021, and proposes to send the peleton up there via the route from Sault,
and descend to Malaucène,
and then to go round to Bédoin
and climb Ventoux a second time
and finish back down in Malaucène……
would that be anything to do with the works being executed up there?
I have my suspicions… apparently they have been at it all year, sorting it out, and still had a way to go when we showed up this Autumn, on a good day… would not have liked to have been up there, even wearing high vis, and a hard hat, a day or two later……
Mrs Melling and self first visited the upper reaches of Le Géant thirty years ago. We went up twice at least. From both sides. In snow. Had to walk the last bits. Since then we have oft returned, in springs, in summers, in autumns (it is closed in winter except to folk on skis and the transmitter tower crew). In that time changes have been minimal but footfall has increased in leaps and bounds. Traffic up top (and nonsense parking) has been getting something of a problem… add in the increased attentions of bikers, intent of reaching the top of this unrelenting climb… well it has made the summit a place to be avoided in season, even to visit the family seat – the only public bench on the whole mountain and a spot to which we make pilgrimage, there to park our arses on the single remaining plank (the other we found broken some years back… it had a large characterful knothole in it which weakened it).
Rather than have me try to explain what'a afoot up there, I can do no better than reproduce one of the public information boards produced and erected by Le Départment de Vaucluse; this one, slap-bang in the building site that was the top road, under the communication tower. You'll cope with the French better if you enlarge the image, and with your inevitably superior ability to my skills with the lingo (as you know, I blame my school). The family seat is not indicated. It is just below the summit bend and looks west. 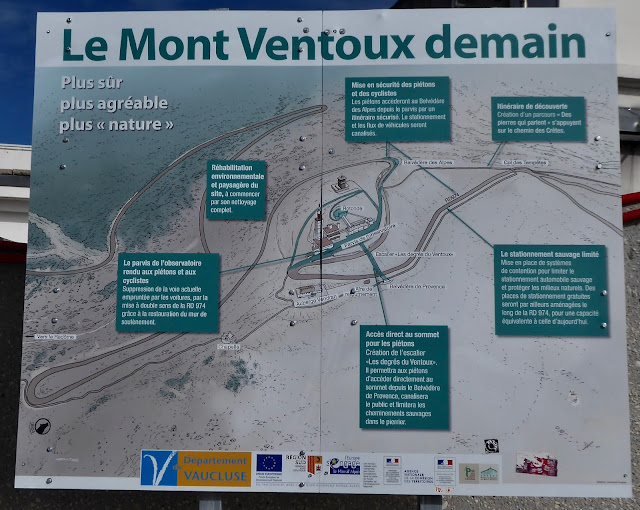 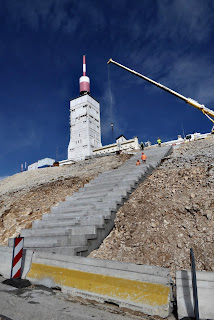 The thing is: why use so much concrete? Isn't it a bit of an insult to a hill made of limestone? Is it in the spirit of protecting the environment? Nope. The path I feature at the top of this post: concrete slab instead of the local stone. Damn it all,  there is enough of it just lying about. Concrete slab with no surface texture… How will that work with Ventoux's famous black ice?
It seems Le Départment has decided to lay concrete where-ever folk have already forged pathways, plus some extras, steps and the like, ('Accés Direct') to compensate the motorised visitor who will no longer be able to drive over the top.  But what an eyesore. What a compromise. Can't see it blending in with the oolitic limestone anytime soon either. Cyclists will continue to have full access to the summit but motorists will no longer be able to stop en route, except at designated 'pull ins'. That's not going to work, if French parking practice elsewhere is anything to go by.
And it looks as though the parking problem up there will be 'solved' by making an even bigger eyesore, ringing the summit with a roadside parking platz all the way up to the Restaurant Le Vendran. Hmm. I hope I've got that wrong.
But the truth of the matter is, the summit will continue to attract, the adjacent slopes will probably still support the rich diversity of tenacious alpine flora, the views will continue to impress and the hill will continue to be the the most distinctive landmark in all of Vaucluse, if not Provence. Nothing stands still but Ventoux itself seems sort of timeless. Will the sheep flocks still pass along the ridge? Might we still spot chamois from the Col des Témpêtes?
The communication tower isn't exactly lovely is it? And yet it has become Ventoux's trademark.
Ours is The Family Seat. 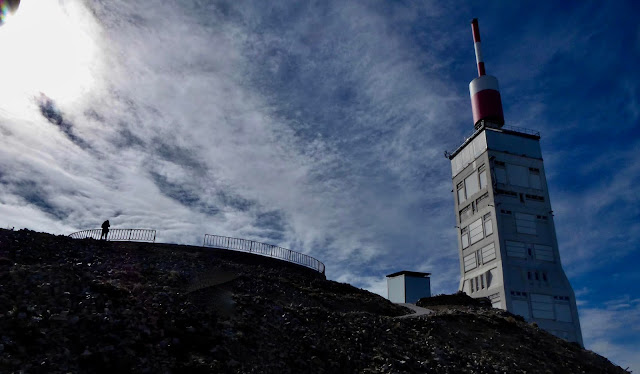 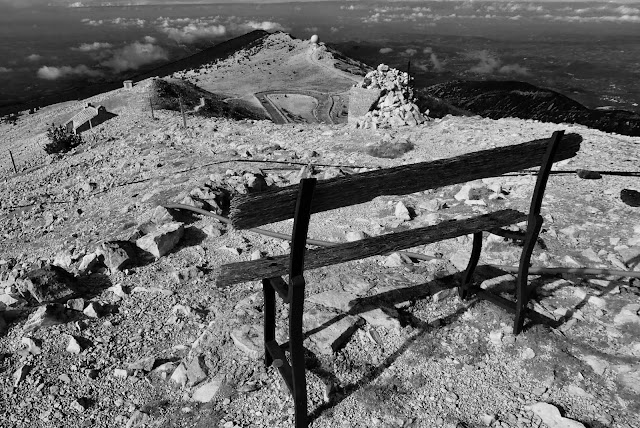 I conclude this musing with an image of Mrs M, some thirty years ago, standing on the hairpin you can make out on my autumn 2020 black and white rendition of what remains of The Family Seat.  There were no crash barriers then, roadside…
Will operatives tidy away the FS this time? —our hearts will be in our mouths next time we summit. . . 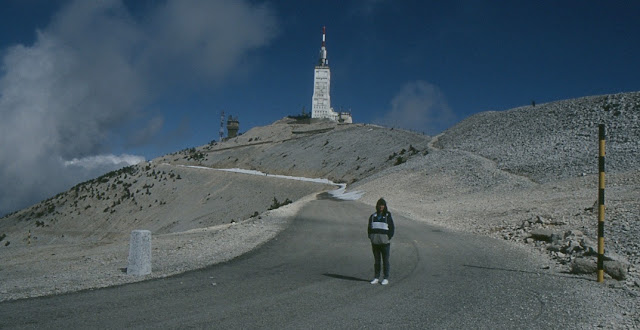