THIS VERY DAMP AND DARK WINTER has been weighing down on us in Devon seemingly for months now; the mud lies thick on road and field, the grey scudding clouds sluice down the scene with slicks of precipitation at almost every opportunity, and if one sees the sun at all it is but a fleeting moment, gone before one can get out of the house, or if already out there, slacken one's sodden waterproofs or adjust one's encrusted wellingtons . . .

So it is hardly surprising perhaps that one casts about for something to look forward to, something to plan and organise, something to set off towards. In this household that is often the consideration of a new trip to Sablet and the possible variations we can incorporate to add interest and spice to the journey.

I thought I might be pushing my luck if I suggested we try to mop up two remaining lighthouses not yet bagged, on the west coast of France, as illustrated by that previously mentioned hero of mine, Jean Benoit Héron.  But I was pleasantly surprised that MM was in favour of an itinerary that could include visits to Phare de Hourtin and Phare de Contis.

JBH has not missed many, if any true French lighthouses from his oeuvre: I think we both subscribe to a common understanding of what constitutes 'a lighthouse' – but it might be a good idea here and now to make it clear what, in my books, a lighthouse is, and therefore perhaps what it isn't. So take a moment to absorb my carefully distilled typological descriptor set alongside this ramble. Then we might share a better understanding of this fascination and I might be excused for being somewhat addicted to these singular structures. The lighthouse illustration behind the typology is courtesy of illustrator Stéphane Bossis. another creative in the genre phare. 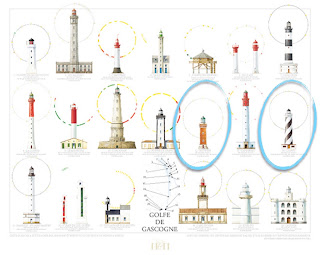 So, the two lighthouses in question are those ringed on this illicit reproduction of Héron's famous poster. All the rest shown thereupon, you've guessed it, we have already scored. We shall wave to Cordouan, pass by Pointe de Grave, and when we have hopefully added Hourtin to our list, salute Phare de Cap Ferret from across the Bassin d'Arcachon (we climbed that many years ago with a then reluctant son-and-heir – we won't have time to make a second visit unfortunately). After that it's ho! for Mimizan Plage where the black-and-white barber's pole paint job of Le Contis awaits us. Hourtin, incidentally was built with an identical twin for some reason but it didn't get the lantern topping, instead gaining military antennae or some such so defence d'entree there probably, to that twin at least. The towers are buried deep in the forests of Les Landes north of Lacanau, betwixt Lac d'Hourtin and the coast, only accessible by a restricted road that is closed most of the summer, so fingers crossed that we can weave our way down it out of season. 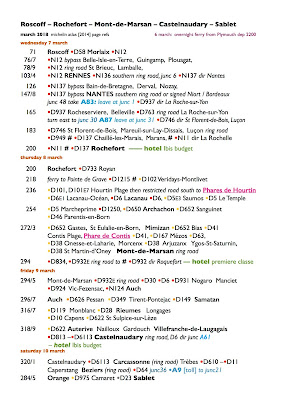 Although it might be tempting providence to exhibit here the planned route by which we intend to progress from Bullsmead to Sablet via Hourtin and Contis, I do so in the forlorn hope that it might be of passing interest to 'my public' . . .  demonstrating once more the care and attention to detail we put into these things. As I have pointed out before to those who may be puzzled and even scornful of such planning, there is genuine pleasure in the doing of it: our route is never laid out as a hard-and-fast plan; rather, it is a framework, not a straight-jacket.

We have of course booked the (overnight) ferry. And yes, the hotels too. Our progress can thus be assured and leisurely. Not for us the mad dash bare-knuckle drive from ferry to destination, grimly pounding hour after hour down this autoroute or that. No, a much more genteel pace is our preferred tipple . . . we are after all, realising a plan laid down in the gloom of a UK winter  . . . and want to get the most out it. 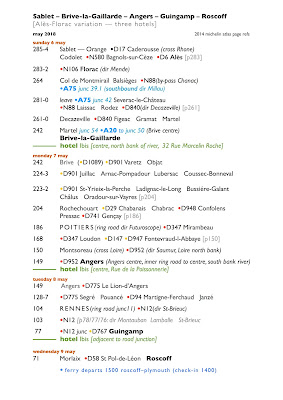 . . . and back again . . .
What may be even worse than setting out one's anticipated transfer to sunnier climes is to plan the inevitable return from thither; but yes, we have done that as well.

Mary has divined that around our anticipated journeying in May there are almost limitless national and international holidays taking place, not to mention a couple of days from the frugal list the UK workforce are granted. So, as we want to use hotels that just might get booked up, and indeed in the booking of said hotels we find that they are getting booked up, well I have also drafted a scenario within which we may expect to get back to the UK, with a bit of a jolly at the end to sample once more a bit of northern coast, prior to getting the boat back . . . I include the proposal herewith . . . We don't need three hotels but thought that we could add a bit of seafood time by stopping off just short of the ferry.

It is, I agree, wrong to wish your time away . . . but I am confident that between the implementation of the first route above and undertaking of the second, there will be much pleasure to be had, back where it is light, bright and springing . . .

Anyway we've booked the beds now – and the boat, so it's a done deal, isn't it?
Posted by adrian smith