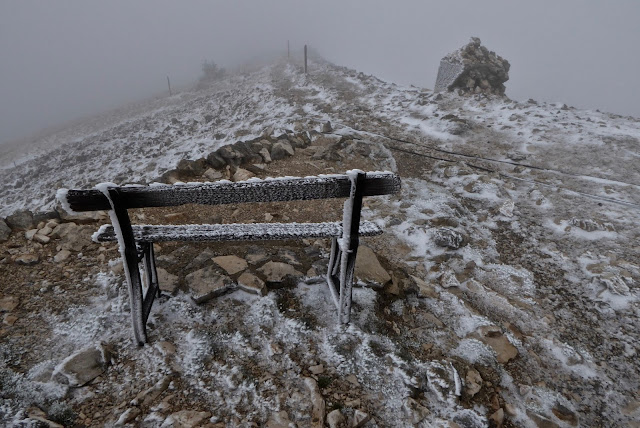 THE INCLEMENT WEATHER to which the Vaucluse is such a stranger returned to mark both the end of the month (April) and the beginning of the next (May). The French were perplexed. the Dutch arriving in droves, and we, for our part had fixtures to honour.

First up, and it was up in a most literal sense, our third and final visit this time out, to the ever magnetic Ventoux. Never mind the dark grey cloud cap Le Géant was sporting when we hove into Bedoin,  — a fixture is a fixture. The occasional flurry of rain was flecking the windscreen as we commenced  the 21 kilometre ascent. The interminable string of misery laden cyclists in entirely inappropriate dress for the most part,  trundling their way to and through the encircling woods confirmed that since our last visit, when we abandoned the motor at the barrier and walked all the way in glorious sunshine, to the Tom Simpson memorial (see above), the road had indeed been opened up to the Ventoux summit. No way down the other side mind, the northern approach from Malaucene still firmly closed until May 16 at the earliest. 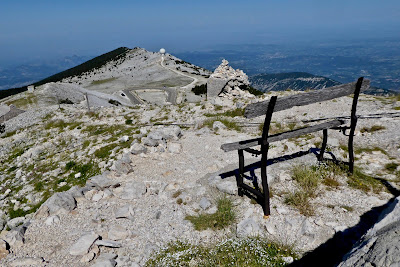 (INTERJECTION! This is what the view from Ventoux summit – family seat in foreground – is expected to look something like by late spring, and what it actually did look like, up there on the 4th of July … blue sky, long views etc; a bit of snow maybe, nippy certainly, but essentially summer on the way…) 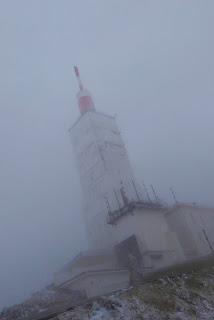 And thus it was that we arrived at last at the dense cloud of the final 500 meters, frozen rain rattling on the windscreen as we peered through the gloom to detect the next darkling figure on a bike (d'you know, not one of the bounders had lights on!), and finally topping out, doing a three point turn on black ice to pass over the summit and down again a touch, to the bit of levelled mountain that passes for the car park of the restaurant. Mrs Melling was vexed to find this favoured emporium closed barred and shuttered, what tables there were blown over and snowed in; so Mrs M's aspiration for a plate du jour or plat de frites was dashed and after a perilous visit to the sacred family seat, pictured top, we contented ourselves with the remembrance of former excellent repasts hereat, and slipped back down the road to visibility light and promise, along with a trickle of severely chastened and chilled cyclo-summitists, mad fools.

We made do with a pizza in Malaucene, and thought ourselves lucky; the French clammer for their menu du jour at mid day sharp, and woe-betide the luckless novice who strolls into a rank-and-file restaurant requiring sustenance any time after 1300 hours because by that time most chefs have already got their coats and hats on and are itching to slip out of the back and get off home to lunch. This place served all day, or so the legend across the menu suggested.

So on May Day we were brought up short somewhat when we convened at St Roman de Malegarde to finally sample at the 'chez claudette' restaurant that has been recommended by all the longer standing members of the Sablet fan club. We took Jenny Kaiser (husband Gerard, who had made the booking by telephone was subsequently laid low with a lung infection so was back home feasting on an egg), and we were to meet Dieter and Gudrun at the aformentioned restaurant.

We were told upon arrival, that there had been a mistake, for which our informant made no apology or restitution in any way, and we had been booked in for 13.30, not the 12.30 slot so carefully requested.. But here we were at 12:15.  Surely we could not have been served as late as 13:30, the chef would have been at home in his slippers! I did not actually see the gallic shrug but it was implicit. No problem —we could eat on the terrasse if we so wished, there was a table covered by a paper table cloth, sans settings, just waiting for the likes of us. The weather, dear reader was of a sort in which waifs and strays succumb in more northerly climes. The temperature was in double figures (11°C) but there was the wind chill factor to consider as well as imminent rainfall. By now the Vaters had arrived. I'd expected them to turn on their heel and I think they almost did, but suddenly they were up for it: we would stick it out and eat on the terrasse. A motley collection of shawls were produced by the establishment, cushions fetched from the Vater's car; the men eschewed the rugs and blankets – I donned my waterproofs and Dieter put on his cap.

Throughout the meal we ate out there (and the rain set in as expected) the table we could have occupied inside remained unoccupied, the booking for which we were sacrificed to the elements not materialising until we were clutching our coffee cups in vain attempts to restore our numbing fingers.

And what of the meal? Was it worthy of the reputation so regularly lavished upon this famous place? Well the entrée was get-it-yourself – acceptable but hardly memorable, the main course was most unappetising in appearance but tasted quite good if somewhat fatty, and the sweets rather good looking and the only aspect of the feast that was well presented. In short, not more than B minus and only graded thus because we found it all rather amusing. Needless to say the sun peeped through the cloud just after we left St Roman. And would we go there again (hundreds of satisfied customers cannot be wrong, surely)? Er. . . probably not . . . or so Mrs Melling and I concluded. 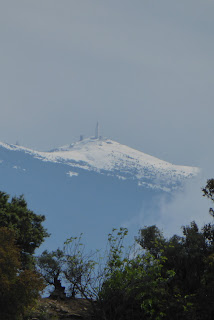 May second and the weather showed slightly more promise after a stuttering start. We were keen to be out in the refreshing air. We noted the numerous nightingales, poppies and other aspects of the Etang Salé-de-Courthézon that delight, not to mention the large amounts of fresh snow gracing the top of Mt Ventoux in the distance. 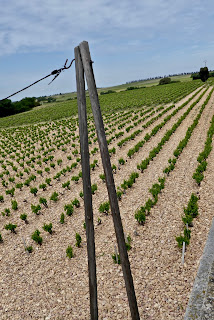 Then up to the hilltop (where we once found an elephant hawk moth caterpillar) with its weird derelict tower and the best coloured galets around, some of which were once used to hold open the doors in no1 RueFB . . . So naturally, thereafter we made a bee line to nearby Chateauneuf for a lunch time plat du jour, just getting in under the wire at 12:50. Within ten minutes we had placed our order, just the plat-du-jour please (steak and chips) and sat back with a glass of the rather pricey but good local red stuff  to wait for the appearance of our meal at our table . . . Mrs Melling remarked that there must be a boat in as the restaurant was awash in Americans: I was sure she opined that they were all 'just off the boat' but she has since corrected this 'mis-hear' on my part; the boat in question would be one of the tourist cruisers that ply the nearby Rhône and set down their passengers hereabouts to sample the exclusive wines and food of the locale.

When fifty minutes had elapsed Mrs Melling ascertained from one of the waitresses who seemed to be serving our cousins from across the pond without difficulty, that our repast had been delayed because the gas bottle had run out on the gas fired griddle.

As excuses go for the non delivery of one's meal this must be one of the most convincing I ever heard. I am sure the demand for food in the centre of Chateauneuf-Du-Pape must result in butane gas cylinders being in a state of constant shortage, and even for those outlets with the foresight  and experience to have secured a spare bottle as backup, there is always the taxing business of changing the bottle. It is not a task to be undertaken lightly or indeed with reckless haste, as our experience at this restaurant demonstrated so clearly to us.

Anyway the steak and chips did arrive just one hour after the order was placed, perfectly cooked steak but almost cold. The chips on the other hand were piping hot. Fair's fair! It was in Chateau-N-de-P after all! I also noticed a customer who was presented with first one pump action dressing distributor for his salad, then another, both devices seemingly malfunctioning; and finally, after fifteen minutes of stolid refusal to tuck in sans dressing, a small white jug of the appropriate anointing oil was brought so that he could dress his salad and begin the meal his fellow guest had already finished. 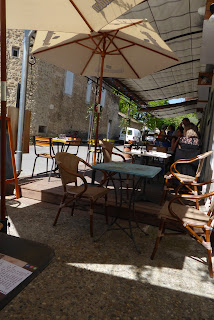 Had steak and chips at Puyméras last week. My, it was good. Very very good. Ten minutes, cooked to perfection. Mark it down Mrs M, mark it down (pictured left).


One has to be ever prepared to take the rough with the smooth when eating out in France. My advice is never to expect too much. Sometimes you will be knocked off your feet by the appetising elegance of a simple meal and at others rendered speechless by the cheek of what one is expected to pay for. I would further advise not to eat anywhere not frequented by locals, preferably in paint spattered fatigues and/or high vis jackets, nor anywhere which is famous as a venue or is situated where yer tourists gather. Try to make it for just-after-mid-day even if you are a late riser and are still dusting off the croissant crumbs from your cardigan. Expect at least a 20% hike if you order almost the same dish in the eventide; eat at lunchtime, mostly. Beware the smear on the absurdly shaped plate, the flourishing plate covers et al . . . you've been had mate, and you will want to cry when l'addition finally arrives . . .

And never ever order andouillette. It is not for the likes of you or me. It is a dish the French can have to themselves,  they are truly welcome to it. Ugh. (The Germans are with us on this, they too are at a loss why this "thing' is even considered to be a foodstuff . . .). Best not to ask what andouillette is made of . . .  for heaven's sake don't be fooled into thinking it is a sausage, like friend Dieter once was. He stills goes pale at the recollection . . . 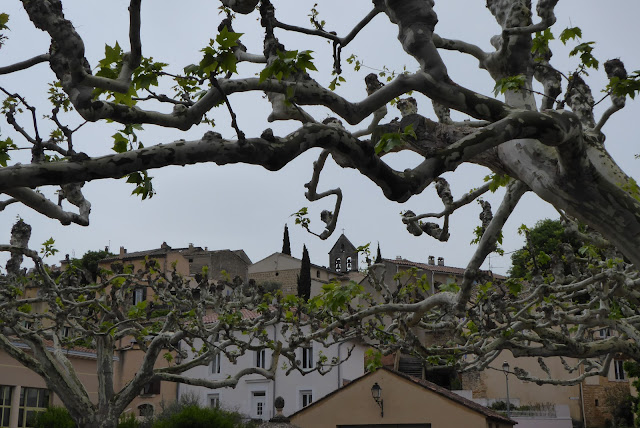