IT MIGHT BE DEEMED INADVISABLE to promote one’s Englishness too vociferously in a full bar-de-sports when the big screen is rolled out and England are playing away to France in the Rugby Six Nations.

The proprietor, after his usual welcoming greeting tactfully invited us to take up places towards the rear of the bar as we partook of liquid refreshment whilst waiting for our pizzas to be produced next door. I had just commented to Mrs Melling how satisfying it would be to see England run in a try while we were present amongst french nationals — when the law of sod took hold and a hero of the Twickenham turf was yellow-carded for an undeniably high tackle whilst France was awarded a penalty try which our rugby international was only trying to contest! It was the only try to the french side in the game, mind, and the motherland managed to score a real one at the other end; but no matter, France went on to a justifiable win thus dashing to fragments any hopes of England retaining the Championship.
We left the bar with lowered eyes and as unobstrucibly as possible . . . the pizzas were out and we shot off back to the homestead to watch the remainder of the match in the safety of our own television lounge . . .
I report this incident to my expectant public rather late after the event due to an absence of digital provision here in Sablet, after we made the decision to pull the plug on monthly payments on our OrangeBox contract — required even when we have suspended our Orange phone line here, as visitors, without which internet use of the OrangeBox is impossible (but the rental of which can only be avoided by complete cancellation and return of the OrangeBox to an Orange retail outlet, for example, the one in Orange).
Having done that last autumn, we now sought to start a new contract with Orange (in Orange), as we concluded our transit via Orange here to Sablet. Mrs Melling gamefully strove to renew our affiliation to all things Orange, in the Orange office (I stayed with the car because we could not seemingly buy a parking ticket on account of having to insert our registration number which is of course one from Blightey so, not being French, is deemed inadmissible for parking purposes in that part of Orange — or something of the sort) – but the opening of a new contract with Orange seems to require a deep degree of complication and chicken-and-egg obfuscation, including a ten working day reconnection penalty for our trouble, and yesteryear type paperwork, letters and proof of statuses plural. However, Mrs Melling duly came away with the new OrangeBox, we think the cables and connections associated are within the box containing the OrangeBox, but someone has to flick a switch somewhere and apparently needs ten days to work up to that momentous action. So that is why this post was not published in the period to which it applies. 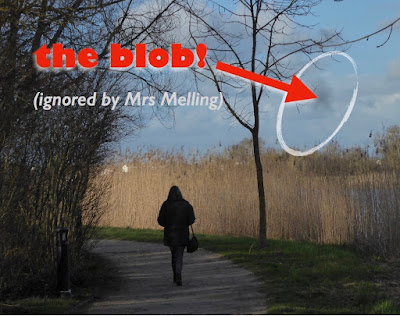 Another aspect and incumbrance to my prosecution of this learned output (der blog) has been the corruption of my camera by the intrusion of a foreign body into the lens assembly resulting in each picture made subsequently to feature a teenage-son-of-a-thing, or blob, disfiguring and compromising the attempts I strive to support my narrative with pertinent imagery. This happened, I know not how, before we fled the chill of the UK, and gave us cause after our relocation in Sablet, to hot-foot it, with the deliquent apparatus, back to Darty at Le Pontet from where it was originally obtained.
The aformentioned retailer has willingly undertaken to facilitate a repair within the warranty period (apparently not one year but two!) —nevertheless I shall be without my TZ70 until the end of the month of March! Fortunately I can ressurect its somewhat shaky predecessor, a Lumix FZ45, rather the worse-for-wear-and-use. In extremis Mrs Melling has kindly and selflessly offered me the occasional use of her camera, provided I make proper application and when within the field, she is within earshot . . . which she often isn’t.  It is the best that can be secured, for now at least.
Of course, being in Le Pontet on camera fixing duties we were compelled to visit the almost adjacent Ikea. I considered it fortuitous that we eventually escaped that emporium without too much expenditure: a few bits and pieces sufficing, a mere £25 or so to our cost . . .
Be assured, all will be done in my power to provide the elucidation my public so clearly craves on this site and I apologise for any impatience felt when clearly there should be appearing right now, new pearls of information to delight one and all.
In my endevours to remain current, the content of these posts is being laid down on my digital desktop, ready to be desseminated, once the man* at Panasonic has flicked away the dust from the camera lens, and returned said camera to Darty and we have trekked to Le Pontet to collect;  and the man* at Orange has flicked the switch, whatever,  to afford us reconnection to your digital world, life, and the universe . . . and has informed one of his/her colleagues to let us know by some means or other that this has been done, and that we can thus begin the procedure of trying to get it all together once again preferably some time before we shut up shop in May . . . Once all this has come about I shall proceed to publication without further ado . . .
[footnote: 'it' has come about . . .  and here it is!}


*or woman
Posted by adrian smith

AND SO IT CAME TO PASS: we made our transit pretty much as planned. We followed, more or less, the projected passage to our three hotels, subject to one or two improvements, routes barrées, and alternatives, — as described in my preceeding blog offering, which gave our route in michelin-strength detail. We crossed La Manche overnight, and as far as we know, we were successful in cancelling the anti-theft alarm on the new motor (liable to activation by the pitch, roll and yaw of a conveying vessel upon the briney) so did not contribute to the keeping awake of said ship after lights out.
We caught the early morning Gironde ferry after our stay in the Rochefort Ibis, (room 108) and in proper order, located our two target phares: Hourtin behind chain link fences deep in the pine forests of Les Landes, Contis more welcoming,  exotically standing proud sentinel above pines on the edge of the wonderful and expansive beaches of Aquitaine. 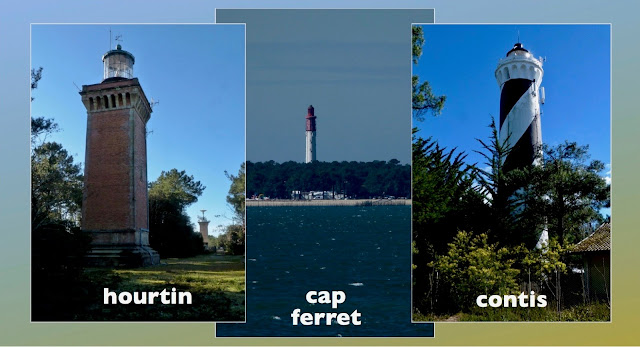 Both lights were added to the west coast family-a-phares in the 19C to fill in perceived sections of dark coast, punctuating a shoreline that would have been almost utterly featureless to ocean goers before the arrival of the current scattering of coastal settlements and holiday gaffs.
In between these two sentinels we saluted the light of Cap Ferret across the Archachon Bassin as we supped on a light seafood themed repast al fresco dans le soleil. Previously a stop at Lacanau Océan had been made after ticking off Hourtin (where, incidently, an invisible sea could be heard in a constant roar of surf beyond the wooded dunes thereabouts) to re-acquaint ourselves with the vast rolling seas-and-sands there, enjoyed one easter some years ago for a holiday when we found vipers on the beach and made massive drip castles.
More competant bloggers than I would have provided a sound track hereabouts of the singular rolling surf that is so prevalent on this Atlantic shore (is it the peculiarly fine silk sand that resonates so distintively; it often squeaks when walked upon) but I am only second division in the bells and whistles aspect of this medium so you will just have to take my word for it. The surf booms. Constantly and wonderfully.

Lacanau Océan is still as brassily vulgar as before, but backed up with those wonderfully indulgent seaside villas of a bygone age, before the riffraff started to want some of the action . . .  we rented one back in 2003. It remains a strange island of humanity in the vast tracts of forests, lakes and endless beach of the area. The snap above gives you that strange oasis feeling as one approaches the place from the north . . . taken in pre digital days (or at least my pre-d-ds).
A glorious day then, and such a shock of bright light after the trudge through the last few weeks of grey grosse bretagne.
The rest of the transfer to Sablet was a bit of an anticlimax, but with its moments: the wondrous panoramas of snow caked Pyrenees and the bustling colour of Samartan; then eating exceptionally well just next door to l’Ibis at Castelnaudary (hotel trois was located without more than one wrong turn this time although I could almost swear it has moved several roundabouts closer to the local autoroute . . . we got another room 108 . . . Hotel deux, at Mont de Massan,  cheapest and by far the best of this trip out, laid on a pristine room 308 for us . . .).
From Castelnaudary almost to Sablet, the accompanying weather was dull and overcast: a little depressing as there are no bars and cafes whatsoever to be found roadside for the first sixty miles, I kid you not, but it is Minervois, after all.


We broke our fast eventually in a down-at-heel bar up in Capestang (I liked it, the street door had a mind of its own, dashed good coffee). Sablet greeted us with sunniness and southerly breezets after one last Route Barrée at Camaret. Numero uno sported an ice cold interior and some evidence of foul play from the central heating. It is taking days to warm the place up but we are here, in the light, and I have even had the time to cleanse the motor which conveyed us here of the road grime accrued . . .  it shines once more and waits to be shown around . . .