terry on the ferry 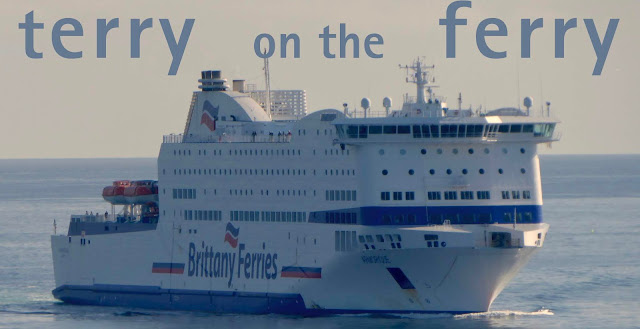 WE'VE CROSSED LA MANCHE more times than we can readily account for, Madame M and me. You'd expect one or two of those to have been a bit on the wild side given how often we've sailed, it's about the law of averages, and it is true we have had the occasional frisky but stimulating passage.

I should think that the ship most often graced by our patronage is the Brittany Ferries Amorique, (my snap of the motor vessel is above) – out of Plymouth (going) or Roscoff (coming back). Overnight usually but not exclusively: this time we'd booked the overnighter.  But when we boarded this favoured conveyance in late September this year [it sports Plisson lighthouse photos as a decorative motif in cabins and the public spaces so gets our thumbs up on decor] together with my senior brother Terry as our travel companion, we suffered a voyage that we mostly want to forget! Nothing wrong with the ship mind you, – but why, well over an hour after its scheduled time of departure, were we still tied up in Plymouth, a bit like a cruiser overnighting on a grand tour?

Well, I concluded, that given the approaching bad weather, forecasted by the met office with various coloured warnings (I think we were attracting an amber), the Amorique's commanding officer had probably decided to adopt a plan to get across as fast and as quickly as poss, rather than take the leisurely pace normally adopted by the overnight boat. I reasoned that maybe the ship responds better to a bit of welly in a storm. Short and fast, rather than slow and sedate. Sometime after 'lights out' then, the ship slipped moorings and pootled off into the E of the S.

Terry had already approved his cabin and taken to his bunk, with us next door up there on deck nine. We all looked forward to being gently rocked to the land of nod, awakening refreshed and ready for the rigours of the first day on the other side.

I might have slept, not sure, because rather more than the usual pitch and yaw proved to be on the nightime menu; we seemed to be on a roll, one side to the other, and them some. I felt it incumbent to hold on manfully to whatever I could, but still got regularly biffed in the upper berth: I feared at any minute I might be precipitated onto the cabin floor below not withstanding the restraining pop-up rail attached to my bed designed to avoid such a occurrence.

We passed a most uncomfortable night we all agreed later. I was glad indeed when the pinkity plonkity music designed to gently bring one to consciousness after a night of calm and health giving slumber, confirmed that we were within an hour or less of getting alongside terra firma and that breakfast was now being served in a number of retail outlets down on distant deck seven.

No surprise then, after bro and self had availed ourselves of the gratis grub we attracted with our club voyage tickets down there, and having ultimately disembarked from the now sober, none rocking Amorique, safe ensconced in Roscoff, that we found ourselves perpetually behind rain streaked windshields for the whole of the day, yeah, even unto La Rochelle and our oft frequented hotel.

The first day just seemed interminable. What an introduction to travelling with the Melling-Smiths! We sympathised as fully as folk trying to pull off a good show for kith and kin might be expected to. Terry did not complain one jot, to give him his due. Mrs M and self might have muttered a tad concerning a certain 'law of sod'…

After such an unprepossessing start, our bad luck ameliorated somewhat and we journeyed on without much more than the odd splash of the wet stuff.

Mrs M and I now think maybe we might be better advised to make the transit a three hotel passage in future, when we have a guest on board, in the manner adopted with Dr G in 2018. I hope the fresh morning  perambulation round La Rochelle for our breakfast, our subsequent missing out of Perigeaux, the overnight at Cahors with attendant bridge inspection, the Viaduc de Millau experience and a sun soaked fish lunch on the mediterranean may have at least offset the rather rocky start to Terry's journey and subsequent stay with us in Sablet. Conditions were, after all, a bit beyond our control. 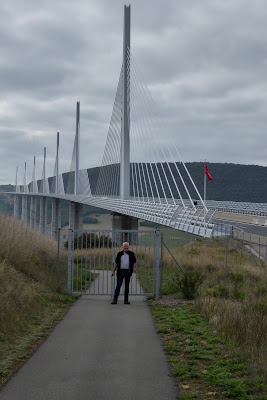 The snaps herewith show Amorique entering Roscoff on a sunnier occasion; our guest braving strong winds and rain at St Brevin, across the way from the St Nazaire shipyards: La Rochelle old port at break of day; KTS at the Viaduc de Millau; and Marseillan port where we lunched at La Pacholene, opposite Noilly Prat, as y'do. The clouds at last dispersed!