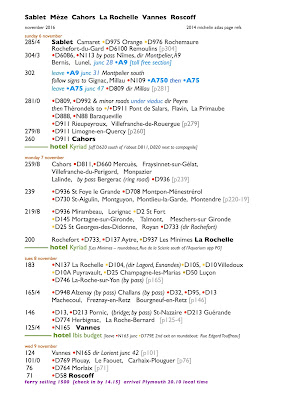 HEREWITH THE RETURN and an explanation of the seeming frugality of our journeying, insofar as we never take our breakfast in the hotel we have graced the night previous. Not for us the all-you-can-eat tussle with prepackaged jam and butter on factory built baguettes or battery farm brioche. . .

It has become a tradition, of many years standing now, to get going of a morning and dispense with the breakfast ritual (and expense), until we have gotten ourselves down or up the road somewhat. Then we begin to look out for likely bar/tabac and boulangerie adjacencies in the towns we pass or that we target to provide our p'tit dej. We don't plan these ahead, although I can report that occasionally we do fetch up again in this town or that and find ourselves in vaguely familiar surroundings . . .

Mrs Melling sniffs out the most likely (quite often the only apparent) source for our croissant needs, makes good the purchase, and then leads the way to the bar/tabac that looks like they may know how to put together a couple of grands crèmes for a suitable price. If we are lucky we get award-winning croissants with coffee of a similar standard. Sadly usually one or the other lets the show down a fraction: the coffee is not strong enough, the milk not scalding or even stone cold  (and is nearly always that skimmed abomination so readily accepted by the franc and file); or the croissants seemingly not altogether au beurre, under-baked, leathery or a bit squashed. 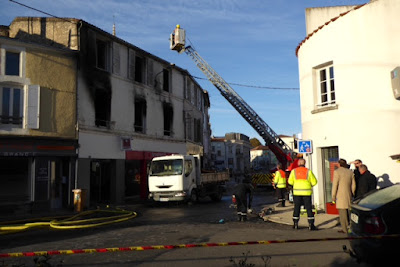 But when, dear reader, we are in
receipt of the most exquisite confections of lightness and delicateness accompanied by très chaud battalion strength black coffee to the brim with topping of, or generous steaming jug of milk to add to taste, then a gentle smile passes over our countenances; any concern at the rather masculine domination of the bars at this time of the morning flits away and we nod and acknowledge the comings and goings of les hommes, the cheery banter between bar man (or woman) and his/her clientèle.

Such was our experience in Luçon this time where the populace was still reflecting on the overnight conflagration of  a property in the town square, requiring motorists to seek passage the wrong way up the one way streets, and up and over the fat firehoses still damping down. [picture by kind permission MM enterprises]

So, of the four breakfasts taken on this return, I can announce that Luçon was the best.  Lunel-Veile  – coffee average (Mrs Melling says) croissants stodgy and slightly under-baked. Plouay – excellent coffee and moderately good croissants with a gratis extra. Then there was Villefranche . . . for the story there please turn to en route II

footnote: the picture of the viaduc-de-millau that graces the top of this page was our view whilst we consumed our picnic lunch, above Peyre on the first day of our 'en route' . . .
Posted by adrian smith 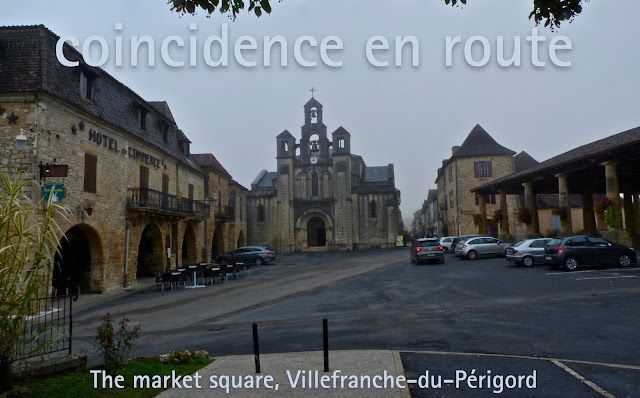 VILLEFRANCHE-DU-PÉRIGORD  did not look altogether promising on the p'tit dej front as we descended from the fog on the hills out of Cahors. True, the place has a solid charm, built as it is to the bastide formula, of rich warm sandstones, on a tight pattern of grid like streets leading to a market square with open sided trading hall etc etc and so on  -- you can look it up, don't expect a guided tour from me I'm not the sort. Or you just might acquire the hand drawn map of the place, like we should have done . . .


Anyway, despite the unpromising air of abandonment appertaining as we parked by the ancient arcade in the square, we persevered and took ourselves down the stately main street. A small boulangerie was open and aglow inside with provender, local jams, sweetmeats and similar,  and there we did secure three fine croissants (two for me as I am beyond caring about restraint). Then out into the chill dank air until a bar we espied. At least the overhead lights were on and the door unlocked but no customers or patron in evidence whatsoever. Until the latter staggered through a back door carrying logs and kindling, apologies, had got in late. No sooner than he had arrived, like moths to a flame they came – the men who frequent the bar of a morning. Each one acknowledged us the obvious strangers and shook hands with all the other customers, each in turn.

Well the coffee was good, the croissants top grade and the bar was warming up as the potbelly stove got going, as we also – got going. By now the square where we had left the motor was busy with the comings and goings of the school run and traffic had begun to filter down the streets and lanes of the town. We strolled around a bit and took the odd snap . . . climbed into the vehicle, with comments that we must come again on a less grey day and take a proper look around . . . and drove on. 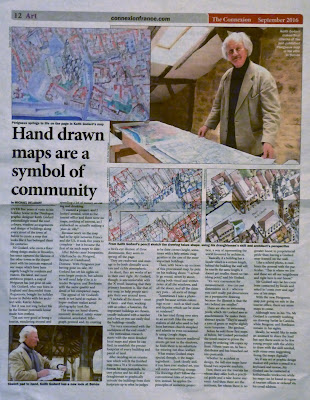 Not until we were safe returned to the home address did I finally remove the Die Zeit newspapers donated to me by friend Gérard Kaiser from the rear seat of the motor, amongst which I found a page ripped from an english language newspaper that I had had no time to look at until now. When I did I realised that what I was looking at was both a very interesting envisionment of information (which, my readers who are aware of my professional past will know – as a designer of information systems, atlases – and the encouragement of same through higher education teaching – well such things rock my boat) and of the tiny town of Villefranche-du-Périgord. Being somewhat short of natural affinity with french (I blame my school), I did not pick up on the name of the place illustrated but the overhead rendition of Villefranche-du-Périgord's market square was so clear that I recognised it immediately.

If I had read the article before leaving Sablet we might have tried to buy a copy of the map produced by artist/designer Keith Godard while in Villefranche-du-Périgord. A chance missed but nowhere seemed open so we would have probably drawn a blank . . . nevertheless  we were rather surprised at the coincidence, wondering if the presence of the article in the car had caused us to deviate into the town, subconsciously, as it were . . .

codicil – we come again
It's September 2017 and we are en route to Sablet via a stop over in Cahors. It is a sunny and warm afternoon as we approach Villefranche-du-Périgord so we think the tourist office might be on stream, and there may be a chance they still have the work of Keith Godard for sale. And sure enough they are and they do. So for the outlay of some ten euros we now have his rendition of V-du-P, clip-framed and on the wall at Sablet, my rather poor reproduction of which is displayed below. As a map it has its limitations but the drawing produces a very clear sense of the place. There isn't really much need for a street plan, we visited most of the streets in a half hour stroll. The town incidentally looked charming in the early autumn sunlight although the cafe in which we dispatched our croissants in November 2016 was closed, so we took refreshment instead under the bunting in the town square . . . most pleasant. 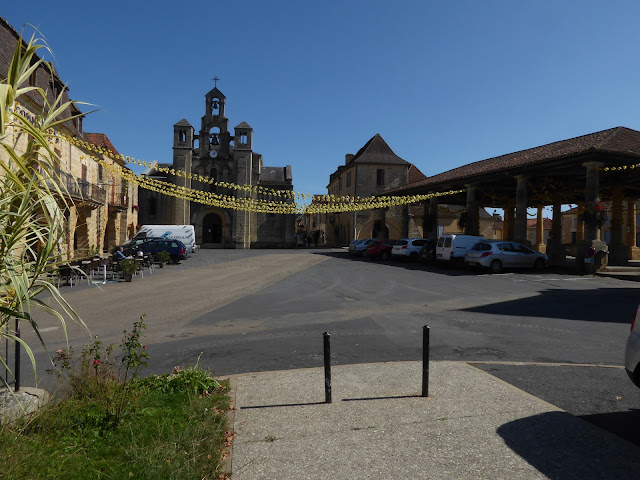 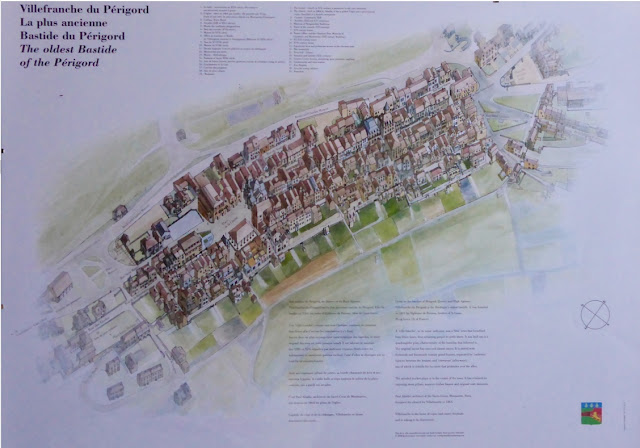