. . . or Canal-de-Carpentras part two.
YOU WILL RECALL, I am sure, our forays and explorations of the spring, to track down and explore this interesting piece of 19th century engineering.  (Make amends now for missing it by clicking here!). Now in the summer, we went off to find it's source, and visited the largest aqueduct constructed to carry it across .

The C-de-C is just another drain on the poor old Durance river, which we have discovered is left with very little water at all to discharge into the Rhône south of Avignon. I followed the river up into the hills (via google earth) from whence it cometh and almost all the way to the Alps the river is beset by EDF canals and barrages to tap the flow for the making of electricity. The original water course is often more or less empty in the summer, and a mere shadow of what it once was, even in winter. At the spot where the C-de-C takes its water there is a large hydro barrage (see pic) and a huge sluice leading to the Canal-de-Marseille (edf).

Not that the Canal-de-Carpentras is the only culprit; there are lots of other irrigation canals pinching the Durance waters . . . the IGN blue series of maps reveal many others; it's just that the Carpentras is one of the more extensive ones and as revealed in the earlier posting, ends up discharging into another river what remains after all the vineyards on the way have had their fill.

The aqueduct that takes the C-de-C across the Sorgue at Gallas is a major piece of bridge building and given the honeypot nature of nearby Fontaine-de-Vaucluse we were surprised to have the top of the aqueduct to ourselves. Lovely views, free access (no cycling) and fun watching the plastic kayaks carrying the young negotiating the weirs below. The railings along the "towpath" are a recent addition . . . it is pretty airy up there even with them in place. Not a towpath either as, of course, this an irrigation canal – no barges here. You couldn't even canoe it really as bridges across are often only just above water level . . . but there is usually some sort of path alongside so it can be walked although it does sometimes go culverting under road widening schemes and real estate . . .

On this sojourn we also visited and walked stretches of the canal near Beaumes-de-Venise which we found rather good for damsel and dragonflies . . .

Inbetween visiting these two locations on the 7th of the month, we slipped along to Cucuron and lunched by the étang there, under the trees, a very favourite place in a very favourite village . . . although it too is being over-gentrified. Why can't the french leave us some rural decay?

An album may be found on Flickr showing other experiences, places and colour. Not many people though, sorry I find they tend to clutter and spoil the the view . . . click this link:
summer 16 france

lighten our darkness (or the journey south)

AS YOU WILL NO DOUBT HAVE NOTICED, (see plans for our outgoing dated June 28) our route from Cherbourg to Sablet is punctuated with a number of lighthouse spottings and tottings. Ideal one might suppose to lighten our dark mood at the prospect of the impending doom that the UK referendum has set course for.

Conversations overheard on the ferry suggested that most travellers thereon shared our deep concern about this ill informed and reactionary result. Not to mention the value of sterling which is once more back amongst the doldrum currencies of the civilised world teetering on the diddly-squat values of the last bank bodge of 2008/9/10/11/12 era.

But as the fair roads of La France whizz comfortably beneath our Michelin Roadmasters (some such rubbery-name-for-tyres) we soon suspend these trying issues for as long as ten minutes at a time, as we enjoy the decorated progress of La Manche's hosting of the Tour de France, and make the neccessary diversions to mop up the odd lighthouses we seemed to miss the last time we were in the offing. Those above in fact, ticked off in variable weather . . .

After a night at Granville, from where stage three starts en route to Angers (Tour-de-France), we head down to further coastal pleasures, of a muddier and more estuarine nature, in particular the antérieur and postérieur lights on both north and south river banks, to guide what shipping left that wants to get up the Charente river, even unto Rochefort, where coincidentally we make our second stopover. Please note: I have been misinformed about the placing of accents on those two words, antérieur and postérieur, in the captions below; cannot be fussed enough to go through the bother of putting them right, sorry, blame my school (I do!). Not all new to us, you understand, these minor lights: we did the Soumards quite a few years back and I must say they have been let go a bit. However, they are still shine out to guide any Rochefort-bound matelot left out there after dark.

Of course we look at things other than lighthouses. What do you take us for? But after the crossing of the Charente we enjoyed once more the lights of the Gironde estuary and fine croissants with acceptable coffee at St Georges, before leaving the coast for now to drive to Cahors. A good route but sadly we found it entirely defficient in phares, either antérieur or postérieur . . . 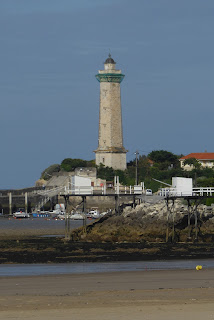 From Cahors we drove a charming D911 (stopping for breakfast in Limagne-en-Quercy which could not supply us with any form of sustenance on a former occasion, years back, when we had to camp there so we went hungry – and it might even have been Mary's birthday to put the icing on it – leading in part to a gathering disatisfaction with the camping lifestyle). Then the A75 toll-free south over the Millau (not toll-free) and then not off round Montpelier as originally planned—but hey ho for Marseillan to enjoy a seafood lunch at the Pacheline, a favourite waterside restaurant on the port. Therafter, a cheery wave to Mèze, then it's the A9 (toll) to bring us to Orange and thence to Sablet, well in time for tea . . .