INTIMATE FRIENDS AND ASSOCIATES will probably be aware of my pre-deliction for something like one wet day in five (or seven or even ten) and may recall my previous discomfiture when resident in number 1 Rue-F-B, experiencing no less than thirty one days without a drop of rain; only to be advised later, that on the very day of departure and after we had ridden out of town,  the heavens opened upon Sablet, with aplomb – hail, lightning and gurgling downpipes . . .

I get ribbed about my liking for the wet stuff, as you'd expect. But I let it roll off me like the water off a duck's back. The fact is we need the stuff: it cleanses the atmosphere, clarifies the view, tops up the aquifers and returns the equilibrium. Let alone bringing forth the provender of the soil and allowing the fruits and vegetables to swell and ripen in the sun that follows. Not bad in moderation when added to pastis, either, in both solid and liquid formats. 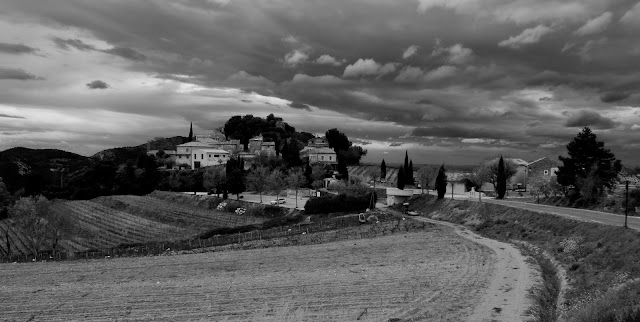 But let’s not get carried away with this. I am not advocating day after day of the wet stuff, neither am I in favour of the depressed temperatures that often attend such continuity of preciptation. I just like a good downpour, when one is quite clear about what is what, when there are no two ways about it: if you go out without donning full, comprehensive rain attire, you will be soaked to the skin. Even more favourite of course is the cut and thrust of a violent electrical storm, preferably at night (— but an occasional matinee performance is never to be eschewed), preferably witnessed from the terrace, chez nous. Sablet usually slots in a good show of this sort sooner or later, but recently we have either slept through the episode or not been in the offing at the appropriate time, thus missing the fun.

Sadly, and too often for us folk from the cool temperate maritime regions, we are subjected to day after day of flat grey stratus with occasional dribbles and mistings of persistent droplets, too little to tog-up for, too much to hang about long in sans the chapeau. 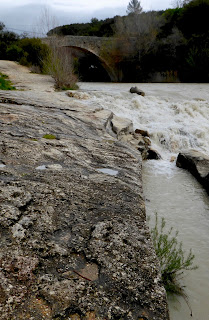 And the light. Oh dear. Where is it? One can hardly see one’s hand in front of one’s countenance sometimes in a wet spring in darkest dirty devon . . .

So here we are in the brilliance of Provence. April still in middle age and the temperatures edging daily upwards towards the thirty mark. This idyll is slightly dented when we hear that back in the motherland the temperatures have been similarly inclined, but there it is something of a record, whereas here it is almost the norm.

What has not been the norm, or remotely the expectation, is wet day after wet day after wet day encountered at the beginning of this month when we set out to impress the continental nature of springtime in PACA upon my visiting senior sibling. Snow came and went on the distant hilltops, when one could see them at all through the veils of mists and scud. Two rather indifferent minor thunderstorms hardly made up for the incessant wetting although the rivers did their best to cheer us up by looking something like proper watercourses, instead of the enfeebled trickle we are more used to. We know they can carry all before them, but in our time here at least the Ouveze and the Aigue have declined to impress very much . . .

The revered brother has since fled back to the record scorching heat that is currently having a good run in the UK. I am relieved to report that we were able [in the final three days of his stay with us] at least to eat outside once as well as demonstrate aspects of brightness lightness and the kick starting of the delayed greening up and flower bursts. Plus a trip up Le Geant to see where at least some of the downpour still resides in the form of the white stuff, resulting in the delayed opening of the public road to the top of that particular vantage point.

Yes, since my kith and kin shipped out it has warmed up considerably, even unto the wearing of shorts and sandals. Not a cloud in the sky. And . . . well . . . do you know . . . I wouldn’t mind a bit of a downpour, y’know . . . just to settle the dust, as it were. Looks like it won’t be long before I shall have to resort to listening to archive recordings of heavy precip. plus thunder rolling round the hills on my iPod device (earphones naturally, Mrs Melling does not altogether share my lusts for your miltary grade deluge) all to soothe the savage breast (get to sleep upon) . . . for (as intimate friends and like-minded associates may attest) there is nothing so restful and soothing as the drumming of rain on the tiles above one’s head . . . save perhaps the drumming of the rain (rattling of hail, even) upon one’s field-proven tentage, somewhere off the beaten track, tucked up in one’s four-season-pure-goose-down, after a hearty repast and subsequent sufficiency of a single malt . . . But that, as they say, is another story (and another time . . . sadly).

Mrs M shudders at the assertion above, adjusts here position on her Poang, turns over a page of her book and reads on . . .

As a small (scant) reward to any poor soul who has just ploughed through the abject piffle presented above, why not waste a few more minutes of your precious time by viewing an associated album of images? Just click on this link: "springing late (spring 2018)".  Or the later album: spring: noticed colours may be more to your liking, I try to cater for a variety of tastes . . . treat yourself and see them both;  go on, go on, you know you want to.

I also refer you to Mrs Melling's le blog, link at the top of this page, which gives a more matter-of-fact and almost daily account of our doings, as well as providing further links to her photographic oeuvre, stored on some (non precipitating) cloud or other, I am not quite sure where.

Codicil: Brother Terry is seemingly not inclined to rule out another visit, to see if he can take his mac off in Sablet: it would seem it is quite nice here even when it precipitates persistently.
Posted by adrian smith