november retreat 2: a hint of the white 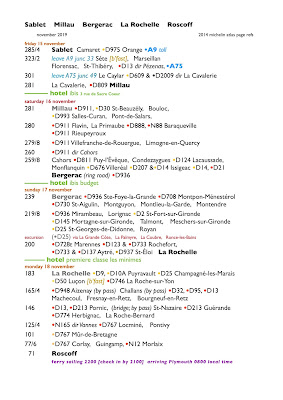 We have looked down on Le Viaduc de Millau from this spot before now but this morning we caught but a glimpse due to autumnal cloud, as you can see. The son and heir was sanguine: it was good enough for him that his parents had at least taken in the longer view at a previous passing, maybe another time, you know in 2020 perhaps? Tsch!

Day two, 16 November, early away from Millau and over the hills. I reproduce our route once more so that you can see our plan unfolding, without having to go back to day one of this progress. My comments about viewing the plan in full screen mode on day one of this account hold good here as well. I recommend it to assist you in achieving a more comprehensive understanding of our aspirations for this journey. It is, I would have thought, rather too small to read without employing the full screen enlargment feature supplied by the software manufacturer. Especially on a Smart phone pixie screen. But you know best, of course.

This route was the one that was thickly lined with cowslips the last time we passed this way. Now we stepped over patches of fresh snow to take in the view shown at the head of this post. A dashed chill in the air as well. After a suitable passage of time we reassembled in the motor and drove on. As we climbed yet higher into the Causses, the white stuff came more into view; before we pulled over to break our fast at a snow dusted Sales-Curan the precipitate had graced the windscreen in passing flurries.  And another excellent haul of croissants was obtained and another splendid round of grandes crèmes were placed before us by a native of the country of origin, running the bar and tabac for many years she confirmed,  and rumbled by Mme Melling as being of English extraction. 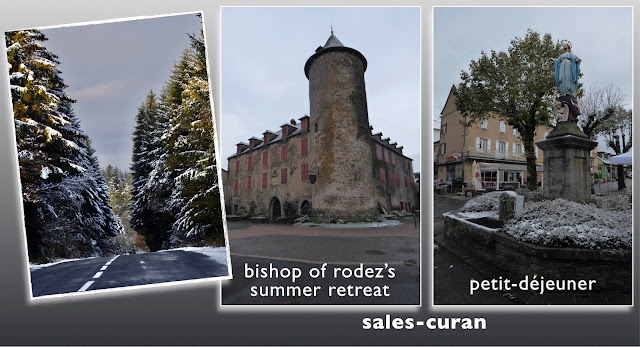 Our comfort restored we drove on, our next diversion, mostly for the benefit of our youngest crew member, was to divert down the lovely Gorges de l'Aveyron once more and pass by the succession of little mills which once pounded iron with water powered drop hammers; they (the mills) get bigger as onefollows the twists and turns of the valley that ends up at Villefranche-de-Rouergue, until one is passing industry only recently abandoned, powered by water turbines rather than the up stream shot-over wheels.

Now, I am sorry that the route I have asked you to examine in detail does not include this excursion. It goes off the D911 to a place called La Bastide d'Evéque which you don't actually go through, and down into a tributary valley of the Aveyron first, to the La Ramonde hammer mill (14th century site and possibly building) on the Lézert stream, see picture here below. We did it first back the spring, 23 April in fact, and completely overlooked by my failure to make a post for that return. I have slipped up badly here, I hardly deserve the loyalty of Mrs Trellis of North Wales, let alone my public at large…
Do let's get on: Villefranche-de-Rouergue then, through to Cahors. 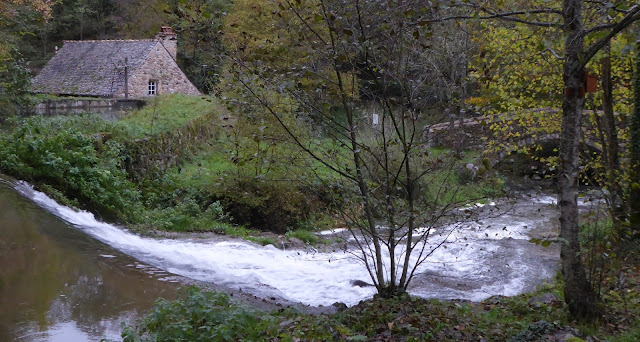 By-passing Cahors for a complete change, we stopped to eat at Prayssac (not listed on my route, sorry, just after Cahors on the road to Bergerac), just across the square from where Mme Melling and self once had an atmospheric top flight breakfast one dark and very rainswept morning. Today the resto was being patronised by a bunch of rather snotty and ostentatious Chinese (wine buyers, Mme Melling opines) who did not pay for their lunch, were being idolised by the patron, and who monopolised table service (and the wine list) to the disadvantage of other diners eating there. Food OKish but overpriced for us lesser mortals. Humph!

The rest of the day saw the weather rather turn against us. Plans to venture into Bergerac were scotched by heavy rain so we settled down to a few odds-and-sods of provender we had with us once we had booked in at the Ibis. Would not be wanting to overdo things, and maybe it would be fine in the morning for a snoop around Bergerac…

All pictures herewith by your author excepting the snow covered pines which Mme Melling secured on her phone through the windscreen of the motor. I thank her for the copyright inclusion of this image.
Posted by adrian smith