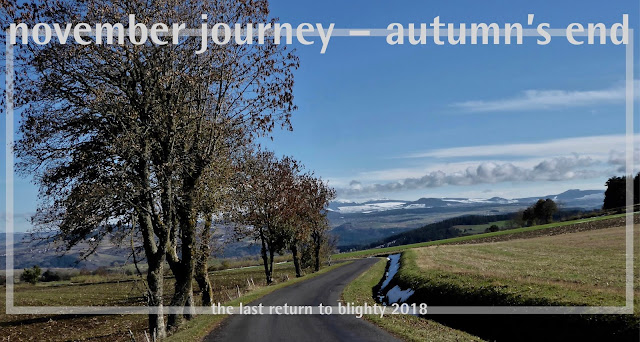 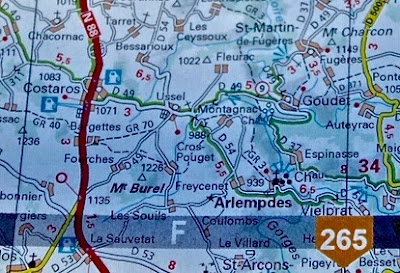 THIS IS THE ROAD TO ARLEMPDES, well one of them, and the one we took. Those of my readership who have already committed to memory the return route presented in a previous posting (the third return) will look in vain to find the road pictured above there-upon, because, here we go again, 'off piste' to see what lies over yonder. This time we are assisted by the son-and-heir who identifies this diversion from our planned progression with the tempting suggestion that down this road we may find what some call the first château on the Loire, no less. Up here? In the heart of the Central Massif? Mrs M rapidly assesses the feasibility using the trusted Michelin, the car is turned, and off we go (the map extract was recorded at the time, hence the blue tint!). We were on that red road (piste), the N88 –  and turned off it round Mt Burel (off piste). 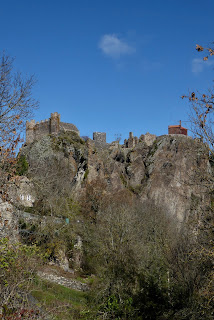 Sure enough, we find the youthful Loire in its upper reaches; and sitting proudly above it -- the said château. Very picturesque,  – (feel free to research the place, I am not about to provide a guide book extract, sorry). Not quite what one might expect a Loire château to look like but it scores as one of the Mes 500 Petits Coins de Paradis en France  and we can now confirm it is indeed a rather striking place. Worth the detour in fact. Pity that once we return to our route, the clock suggesting that we might wish to secure a lunch venue, we manage to find the only roadside place for miles, good food as far as what we are in receipt of, but inattentive table service, resulting in us giving up at last in disgust, foregoing our île flottante, to get back on the road before dark! So much for the roadside restaurant.

You'll note the residual snow in the intro picture, up there on the heights of the Central Massif. All the way up we encounter evidence of recent heavy falls but fortunately, a thaw following: so that the roads are wet but clear. Best of all, the sun is out, the sky is blue and we are on the road again. Nice! We overnight at St Pourçain-sur-Sioule, near Vichy – not risking the town's restaurant (this town has few; the one we gave our custom to twice before is the one I walked out of, the second visit, a year or two ago, I shudder to recall it). No Sir! We eat our own supplies, brought with us, mindful of the paucity of provision hereabouts… beer, sausages, hb eggs, crisps, fruit, etc. A jolly repast … Once bitten twice shy…

THE SECOND DAY on the road starts before daybreak at this time of the year. No lazing abed for us, we are off betimes and don't pull over until we reach La Machine where we break our fast with class A grande-crèmes to wash down bespoke croissants while we watch the street market getting up and running. From the interior of the cafe, mind – it is a little nippy in the street.

As we proceed thereafter, a fingerpost is passed which points us to a sixteen lock flight on a nearby canal, and when son-and-heir checks it out (he carries a reference section) and points out that the waterway cuts through a major watershed (between the Seine and Loire basins) we about-turn and by narrow country roads bring ourselves through the morning mists to inspect this feat of canal engineering. We visit the first six locks or so in the deep wooded valley it occupies and then pop round to the other end of the staircase at lock 16. All is quiet as one lock basin is drained, presumably awaiting some form of maintenance, but clearly a popular and fully working canal route in the season.

Our next stop is to visit the grave of the singular,  prolific military engineer Sebastien Vauban, supremo of 17th century fortress building/engineering and shaper of many of France's finest towns and cities. Mrs Melling and self passed by a year or two ago but the offspring has not had the pleasure so here we are in his village church. His heart was removed in a somewhat awkward set of circumstances to be placed in Les Invalides, by order of the Corsican, when he was the Emperor. I hope he got the bit he wanted as Vauban had been dead and buried for many a year by the time Napoleon had this idea… I gather the rest of Vauban is still in the sepulchre of this church at Bazoches, which needless to say is on his family estate, below 'the big house'. Not far from Vézelay…

After rather a lot of kilometres more, most of which are in autumnal sunshine across the vast undulating farmlands of central France, we reach the foot of Mont Aimé on the edge of the Champagne region and we go up there as we know, from a previous visit, that this is a site historique and the views are big and beautifully colourful. Adam discovers that the site also features in his Mes 500 Petits Coins de Paradis en France, but it didn't have those stands of wind turbines when it made history, nor the last time we climbed up here to look over the vines to the croplands beyond.

All these diversions, plus the distances inbetween, mean that we only reach our hotel (Maubeuge) after dark, romantically located behind a filling station, a hotel all right in its way but not remotely near any source of sustenance. We make do.  But too far really, now that the clocks have gone back… well over our normal 300 miles a day limit.

ON THE THIRD DAY, we scrape the frost off the car before daybreak (for the first time this autumn) and find our way through the red brick villages to Ors and the reason for coming this way at this time. Only this day will do. Because it is 4th November 2018 and one hundred years to the day since Hugh Melling was killed hereabouts, taking part in an attempt to cross this canal to capture a German occupied farm house that still stands today. We are here to lay a wreath on his grave on behalf of us and other Mellings various.

There are others already in the cemetery this morning: Wilfred Owen died in that same action that took Hugh's life and his grave, two head stones down from Hugh's, attracts attention all the year round (we have been here before you see, so we know) but this centenary is bringing in coach loads of folk later on so we know to be early. So we are, and those already amongst the headstones politely give way to us as we are visiting a family member's grave.

Recipients of this year's marmalade production will understand the significance of this visit to Ors. I reproduce the label at the end of this posting.

After this sombre task we go back into Ors to stare down the canal that proved such a fatal obstacle to all those men, and then on to The Forester's House, just to show Adam the place where Owen spent his last night with his men (now transformed into a pilgrimage site, in white) We have been there too before –sans Adam– but today is not the day for visiting as it is about to  receive the coach parties of Owen enthusiasts so we pass by to a nearby town for our last breakfast on french soil this year. Top flight croissants I have to say.

That town is Le Cateau, where Matisse was born. There is a museum seemingly full of his work; but we haven't got the time to view it and anyway it isn't open yet and we have to get ourselves west by auto-routes various in time to get a proper meal somewhere or other, visit the two target lighthouses and eventually to take ship unto Portsmouth, from Ouistreham, overnight.

We make good time, as one does when one uses the auto-routes, undistracted by side roads and beckoning attractions off, so that we can have some time on the sea front of Le Havre after bagging the light on the Cap d'Antifer (see below!). It is warm enough to sit out and drink expensive coffee in Le Havre as well as take the odd snap and stroll amongst the Sunday afternoon crowds.

There is some disagreement as to whether we have driven over Le Pont de Normandie before (I think we may have, but now I'm not so sure) but we have certainly visited the south side of the Seine, underneath the bridge, at least twice. It is a towering achievement: worth the toll to cross it. Given the need for shipping to pass under the structure, the bridge sports considerable inclines. It is a favourite. Glad we are going south though*, just look at the traffic coming north! (pictures from Mrs Melling's in-car snappings. *Mrs Melling opines we are going west, actually – but the bridge is aligned north-south, so there. True, our general tendency has been westerly today).

And so unto Ouistreham our port of departure and the second target phare, passed by many times before but not photographed for some reason. The truth is, we haven't used this crossing back to Blighty for many years, before I was smitten with the lighthouse bug, that is. Finally we get a proper meal before embarking, at a price that makes my eyes water a little, I have to own. We sail a bit late, an overnight crossing it is, arrive in Portsmouth on time where, once released by UK Border Control,  it is… almost raining…

Thereafter, its heavy Monday morning traffic, a full English breakfast in a welcoming café in Bridport and an arrival back at Bullsmead at midday precisely. The garden is buried in leaves, the lawn calls for scything and it has been very very wet. Notwithstanding, we put this transit down as a goody, even with the trudge from Portsmouth to Devon taken into account… 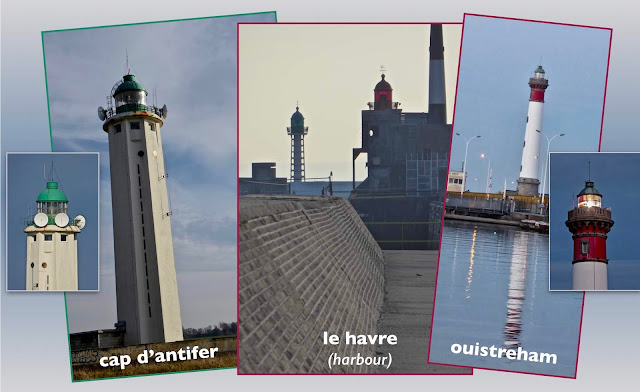