AS THE AUTUMN PERIOD in Sablet drew to a close we were comparing notes over a repast with Messrs Nelson and Surgenor, and the already mooted idea of a trip away to Antrim was suddenly firmed up, the excuse being the forthcoming seven oh anniversary of self, as an excuse, if any were needed. Without a moment's thought Louise blocked any potential booking for the house in Ballintoy, so that we would have the best of seaside shelter for our visit.

And so it came to pass. In early February, the three of us, – for Adam cleared his diary and other commitments to join his ageing parents – drove to Cairnryan (via Bath, and then a stopover in Ormskirk, much thanks to Janet and Phil) left the motor in the P&O car park and sailed in glorious sunshine across North Channel to Larne, (noted lighthouses illustrated below although distant Ailsa Craig is omitted through lack of space) where we were met off the boat, given the Coast Road and Glens of Antrim tour, and thence delivered unto John and Louise's singular dwelling in Culleybacky, all in Paddy's french reg (84) Renault people carrier. Driven by John, with Louise and Poncho also on the bridge. Supper and the rejoicing ran late into the evening, if memory serves . . .

And so our all-too-short stay began. A wet and a cold start saw us gaining The Titanic Experience in Belfast, a bit pricey but worth it, before we 'transferred' to Ballintoy, J&L's gem by the sea where they left us to our own devices but with the use of their car, and a goodsome basket of provender to meet our bodily needs. What a place! Just look at the view (that's it at the top of this missive). 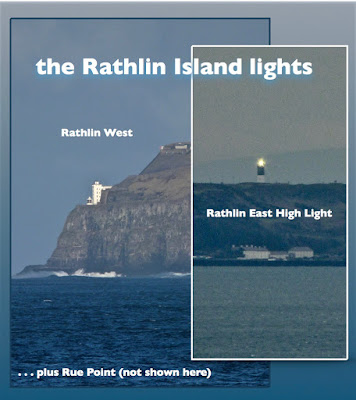 And right in front of us the Rathin West lighthouse on Bull Point,  Rathin Island, which throbbed red throughout the night until daybreak! Wondrous!

We then had two full days of exploring and the weather improved enough to allow a wonderful walk along the Causeway Coast (world heritage status awarded) to score the Giants Causeway and dodge the National Trust's efforts to strip one of a large sum for the privilege when it is actually one's heritage, and the world's for that matter. Explorations of the coast proved Antrim to be top flight coastal scenery, with distant views of Scottish islands to add to the atmosphere. Back in the house we warmed our toes in front of the peat fire and slept in comfy beds to the sound of the breathing surf, a few meters in front of our windows. Balleycastle provided a fish supper one evening and then we had a first rate restobash in Portrush on our last night in Ballintoy, with J&L  — and proper Guinness. 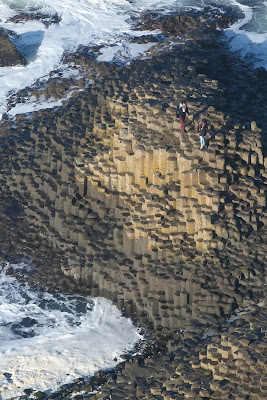 This record, you understand, is a mere taster of the fun we had, the pleasure we took at the familiarity and peculiarity of our surroundings, the friendliness of one and all . . .

On our last day, after a walk to another NT money-maker (name escapes me but it's a footbridge to an island, we declined the several quid charge to set foot upon it)-- we drove back to Culleybacky, handed over the car keys then relaxed in the extensive and supremely comfortable accommodation that J& L occupy when not in Sablet: built, designed and owned by them. A grade, singular. Envy.

On sailing-back-day we took off in the Paddywagon to partake of an Ulster Fry in Belfast's St George's Market before John did some rather dodgy u-turns, backings up and snail pace driving amongst the grand streets of the city as well as the Falls Road etc . . . a regular sight seeing tour, and in a froggie van, so clearly incognito!

The ferry back was smooth and quick, a mere two hours before retrieving the family tumbril, then trudge down to Ormskirk, supper and chat as well as a meal out at The Cricketers with Janet and Phil then driving back to dirty Devon.

Wonderful wonderful!! Thanks to to all concerned; at last we have crossed the sea to the oft misunderstood Ulster, and what I saw I liked and want more of . . . please! John and Louise wondrous hosts. capital!